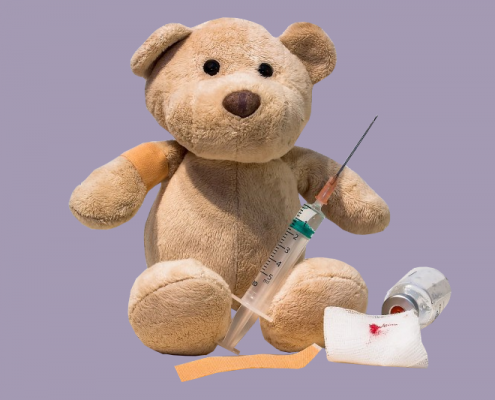 In the fourth and last part of this series, finally, I want to talk about the much-discussed possible harms of vaccines. I hope to dispel one or other prejudice against vaccines.

Are additives in the vaccines safe?
In addition to the pathogen the vaccines contain other additives and preservatives. These applies to all other drugs as well. Their compatibility is checked very carefully before approval of the vaccine. The most commonly discussed additive is mercury (thiomersal). Thiomersal has been used in vaccines as a preservative to prevent fungal and bacterial contamination. Thiomersal contains mercury. Mercury is regarded as nephro-(kidney) and neuro-(nerves)toxic, but only in much higher doses than those found in vaccines. Clinical studies did not show any association between the presence of thiomersal in vaccines and neurodegenerative damage. However, thiomersal has been removed from all pediatric vaccines in almost all European countries. So, there is no more reason to worry about it. Aluminium is used as an adjunct in inactivated vaccines. It serves to increase the effects of the vaccines. Without it an effective vaccination with inactivated vaccines is not possible. Their quantity in the vaccines is well below the threshold prescribed in Europe.

Vaccination and autism
Probably the most widespread and unsetting misinformation. Caused by a study with a dubious methodology published in 1998, which allegedly demonstrated an association between measles vaccination and gastrointestinal disorders and development disorders in 12 children. In 2004, an American journalist published references to a conflict of interest of the author, whereupon 13 of the co-authors distanced themselves from the article. Finally, in 2011, the article was completely withdrawn by the journal (source: Paul-Ehrlich-Institut). In a meta-analysis of the Cochrane library (database of scientific publications), no association between vaccination and autism or Crohn’s disease (an inflammatory bowel disease) could be confirmed.

Vaccination and diabetes mellitus type 1
In recent decades, a possible link between the development of type 1 diabetes mellitus (predominantly in young age due to insulin deficiency) and vaccination in childhood has been discussed. Such an association cannot be confirmed in any scientific study. In 2000 there was conducted one of the biggest study about this argument. Interestingly, this study found a potentially increased risk of developing type 1 diabetes mellitus for children with very early and perinatal (at birth) infections.

Vaccination and allergy
An allergy is an overreaction of the immune system to basically harmless substances. Many patients are afraid that vaccinations can lead to the development of allergies or exacerbate existing allergies. Studies have shown that there is no connection between vaccinations and the development of allergies. It even seems to be the opposite. In countries where there has been a duty to vaccinate, such as the former GDR, there were fewer allergies. In some cases of allergies or atopic dermatitis, there is an improvement from the vaccinations. Caution is advised only if an allergy to any of the components of the vaccine is known. Then, the risk and benefit must be discussed with the physician.

This website uses technical and third-party cookies to ensure the best browsing experience. Without cookies, important functions will not be available and the site will not work properly. It is possible to change the cookie settings at any time on the Cookies dedicated page.

We kindly ask you to accept the use of cookies to improve your browsing experience on our website.

Click on the different tabs to find out more about the types of cookies we use and to change your preferences.

Please note that blocking some types of cookies may affect the proper functioning of our site.

In the Enabled cookies list tab we provide you with a list of the cookies stored on your computer related to our domain so that you can check what we have stored. For security reasons we are unable to show or modify cookies from other domains. You can check them in the security settings of your browser.

Essential cookies are strictly necessary to provide you with the services available through our website and to use some of its features.

Since these cookies are strictly necessary their refusal will have an impact on the functioning of our site.

We fully respect your choice if you want to refuse cookies and, in any case, if accepted, you can always block them from our site and delete them by adjusting your browser settings.

THESE COOKIES ARE VERY IMPORTANT FOR THE CORRECT OPERATION OF THE WEBSITE AND IT IS NOT RECOMMENDED TO DISABLE THEM.

These cookies collect information that is used absolutely anonymously to help us understand how our website is used and to help us customize it in order to improve our services and your experience.
We use GA4 with GTM Server-Side (with server in Europe) respecting the privacy of our users as required by European and Italian laws.
If you do not want us to track your visits to our site, you can disable tracking in your browser.

Since these providers may collect personal data such as your IP address, we allow you to block them.

This could significantly reduce the functionality and appearance of our site.
The changes will take effect once the page is reloaded.